Adress for your navigation system:
Karl-Schönleben-Strasse or exhibition center (Messezentrum) as a special destination.


Arriving by train
Arriving at Nuremberg´s central station (Hauptbahnhof) by ICE (Inter City Express), IC (Inter City) or one of the regional trains.  The journey from the central station to the Exhibition and Conference Center by underground line number 1 (direction Langwasser Süd) takes only eight minutes.

For travelers with City-addition on their DB ticket, the underground transfer is even free! 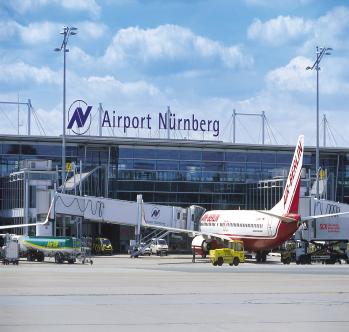 The international  Albrecht Dürer Airport Nuremberg is one of the most important infrastructure carriers for Northern Bavaria. There are non-stop flights to Nuremberg airport from the major European capitals. The closeness of international airports such as Frankfurt, Munich, Zurich, Amsterdam and Paris ensures optimum connections to the intercontinental flight network.

Nuremberg airport is close to the city and Exhibition and Conference Center.
Access to the U2 underground line to Nuremberg Röthenbach in front of the terminal. Change at Nuremberg main station to the U1 underground line to Langwasser Süd, leaving the train at the „Messe“ station. Total journey time 20 minutes.